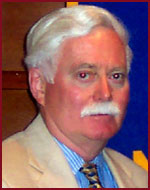 Jack Savage has been a resident of Maywood, New Jersey since 1968 and has served three terms on the borough’s Council since 2004, and as Council President in 2011. Retired in 2002, Jack has volunteered his services across several organizations.

He is the immediate past Board Chairperson of the Cusack Care Center at Saint Joseph’s Home for the Blind, Jersey City; Pastoral Care Assistant at Hackensack University Medical Center; a current member, and past President, of the Saint Peter’s Prep Alumni Board; a monthly Apheresis Donor at Community Blood Services, Paramus; Lector and Eucharistic Minister at Our Lady Queen of Peace Church; and a past president of the Rotary Club of Maywood. Jack previously worked as Assistant to the President of Saint Peter’s College, Jersey City; and as a senior manager for the Port Authority of New York and New Jersey. Jack holds the rank of Captain (Retired) in the United States Navy.

He is a graduate of the United States Merchant Marine Academy, Kings Point, New York where he received his bachelors degree and from New York University where he received a Masters Degree in Public Administration. He is also an an alumnus of The Naval War College, in Newport, Rhode Island.

In 2006, Jack was an inaugural inductee into the Saint Peter’s Prep Hall of Fame and recipient of the school’s “Brother Paul Harrison, S. J. Award” for distinguished service to Alma Mater.